How to Breed Superworms

How to Breed Superworms. Superworms are a fisherman’s best friend. There are different types of worms that you can use when breeding fish. It is important to understand their features and characteristics, to help you have an easy experience. Some people confuse superworms with mealworms, which are also known as king worms. Superworms are softer than mealworms. Why is this important? The softness of superworms makes them easier for fish to consume.

One of the main benefits of superworms is that they are also very easy to breed, and affordable too. If you are the kind of person who is interested in cutting costs, learning how to breed superworms on your own will help you cut costs. Besides, breeding superworms is a very easy process. To do this properly, you must learn about the four stages in their life cycle, because each of these will play an important role in the success of your breeding program.

Superworms have four life stages; the egg, larvae, pupa and finally they grow into beetles. The beetles reproduce. Once your superworms are in this stage, you can be guaranteed they will constantly keep reproducing for as long as they are alive. If you plan properly, you will easily have a consistent and unlimited supply of superworms to feed your fish.

As you plan on how to breed superworms, you must make sure you have the following things ready:

You can either visit a farmer who produces superworms for commercial purposes or places an order online for delivery to your home. As soon as you get the worms, place each of the worms in a clean baby food jar or film container, whichever you have ready. Ensure each of the containers has a hole in their covers, to allow for air circulation.

Separate each of the worms individually, so that they can metamorphose into the pupal stage. This period can last up to two weeks. During this time, make sure you keep the temperature manageable between 70 and 80 degrees Fahrenheit.

Why is it important to keep the worms apart from one another? It is almost impossible to get the best beetles to begin the next breeding cycle if you keep them together. Since one of the reasons why you are learning how to breed superworms is to continue your own breeding and save costs in the process, you must do all you can to ensure the quality is not compromised. At the same time, do not feed the larvae at this time, not on food or water. If you make that mistake, the morphing process will be longer than earlier on expected.

Keep an Eye on the Production Process

It is advisable that you keep a close eye on the worms from time to time. Inspect the breeding containers physically, and keep an eye on the temperature too. If you notice that the ambient temperature in the room is dropping, readjust the heater to accommodate the predetermined temperatures for efficient growth. In case the temperatures are increasing, prying open a window might allow some cold air in, thereby helping you cool down the temperature.

In a few days, the worms will have entered full hibernation mode, and in this stage, they should be dormant. If, in the early days of morphing, you notice that some, if not most of the worms are curling, this is a good thing. It is a sign that the morphing process has started. Keep monitoring the worms regularly because, in this stage, which can last between a week to two weeks, most of your contribution to the morphing process will be monitoring the temperature and adjusting the conditions accordingly.

All the worms will not make it out of this process successfully. Some will die. This is also one of the reasons why you need to keep monitoring the process. For those that die, you might find them straight while the others are curled up. In some cases, they will be hard and black in color. If you notice any such worms, they are dead and should be disposed of. 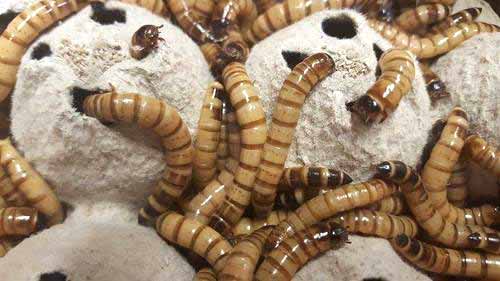 How to raise and breed superworms

Now that you know what is important in how to breed superworms, how do you proceed once they are out of the pupal stage? By the end of week two, the pupa should be morphing into beetles already. Their legs are darker, an indication that your beetles are almost emerging. The stage between pupa and beetle should also last another one or two weeks. The worms that have already pupated will either be cream or white in color.

At the end of the second week, all your worms should have turned into beetles. Once they convert to beetles, you can migrate them into a larger habitat. In this new habitat, you can put them together. This will be where they live and breed, to help you start another generation of superworms.

For efficient results, make sure the new breeding space is fit for the procedure. One of the first things you must do is to make sure you have sufficient substrate at the bottom of the breeding space. Some of the best substrates for beetles, in this case, include Sterilite and Rubbermaid. Make sure your substrate is no less than an inch thick.

You need a sizeable substrate because in as much as the beetles will use the substrate as their sleeping area, they will also lay their eggs on its surface, and eat it too. Beetles can also eat their own eggs. You, therefore, need to take preventive measures against this. This is where an egg tray comes in handy. The structure of an egg tray makes it easier for beetles to gather around. Since they have a gathering place, they will barely dig into the substrate, reducing the risk of the beetles eating the eggs that they have laid already.

You should provide sufficient food and moisture for the beetles. Since you cannot water the breeding area, you can achieve this through sliced apples, potatoes or carrots. In some cases, you can use water crystals.

You have to be very careful when adding water crystals so that you do not put too much. Too much water into the substrate might ferment the bedding. Fermentation leads to the formation of bacteria, which will eventually infect and kill the beetles. On the other hand, insufficient moisture or water can dehydrate the beetles, and in order to survive, they might resort to eating one another.

It has taken you a long time from the moment you got the worms, cared for them through the metamorphosis stages until they turned into beetles. Your beetles are breeding and creating more superworms for you. How do you raise them? How do you make sure you have a constant and healthy supply of superworms for your farm or whichever purpose for which you need superworms?

Any eggs that remain in the old breeding ground will probably hatch in around three weeks from the time they were laid. You must be keen on this, to ensure you have food matter ready for the worms during this stage. Remember that they also need fresh food, just like any other animal. If you plan on breeding superworms to feed perhaps your fish, you need to feed them fresh and healthy food so that your fish will also feed on fresh and healthy worms.

The pupae that have morphed from the eggs become the superworms which you can feed to your fish. The beetles that you moved to a new breeding ground continue a new cycle of laying eggs. How long will this go on? A healthy adult beetle has a life cycle of around five months. What can you achieve in these five months? Well, a healthy female beetle can lay hundreds of eggs in these five months.

Breeding super worms is not a difficult task. You just need to be very patient. In fact, superworms are some of the easiest worms to breed. You can do this with very simple appliances and equipment. When you do it properly, you will almost certainly have an unlimited supply of fresh superworms.

Continue read related article for How to raise mealworms and leave your comment here!

What Tools Do You Need For Your Home Remodel?

How to take care of mealworms, mealworm pupa care.