Home » Animal » French BullDog: all you need to know about this dog breed
AnimalPets

French BullDog: all you need to know about this dog breed

A small dog with the appearance of a ferocious mastiff, the French bulldog is never tired of seducing, as much by its physique as by its character. Cheerful, playful, but also very gentle, he is a perfect companion for children, as well as for the elderly. Very attached to his master, this dog is perfectly suited to living in an apartment.

In this piece, we will dive deeper to uncover some interesting fast about this breed.

A breeder of French Bulldogs, tells us more about the character, the way of life, the education, or the health of this little dog as funny as it is intelligent.

French BullDog: all you need to know about this dog breed

The French bulldog and the others: Is he sociable, does he enjoy the company of other dogs?

He is a sociable dog, but as with all breeds, adopting two males should be avoided because their cohabitation is not always harmonious.

Is cohabitation with cats possible?

Yes and, when there is a problem, it is rather the cats who initiate hostilities. But generally, either the two species coexist harmoniously or the cat avoids contact with the dog.

Would you advise a family with children to adopt a French bulldog?

The French bulldog is a breed that is very suitable for families. He is a dog with a big heart, tender and sociable, and also very attached to his master or even exclusive, which can make him jealous of other animals. In the same household, it is not recommended to take two males, because cohabitation will be difficult. However, don’t be fooled by his hound-like appearance, he’s gentle and will always be very excited to play. Very playful of course, he is also endowed with adaptability and knows how to be calm and wise. Lively and intelligent, he enjoys the company of children and is also suitable for older people since he does not need to exercise too much.

His attachment to his family makes him an excellent guardian. He tends to take himself for a large dog and knows how to show courage and daring sometimes too much, his master having to ensure that he does not put himself in danger, because he will not hesitate to defend himself and the owner. Some Bulldogs can be dominant. Thus, a few days of training are sometimes recommended when the dog is young to teach him basic educational principles.

The Bulldog can understand the mood of its owner and feel it. If you were down on morale, it is likely he joins you in that mood. In addition, this little snorer loves to take a nap and appreciates its comfort.

He is welcoming to the guests at home. And if it is you who are away for a few days, he will give you a warm welcome when you return. Note that the breed does not support loneliness.

Yes, the Bulldog adores humans and children in particular, with the limitation that no breed of dog, whatever it is, should be placed in unsupervised contact with very young children or infants due to overflows affection of the Bulldog.

A sporting dog or a hell-raiser?

This is a dog that lives perfectly in an apartment but appreciates the space provided by a garden; he likes long walks but as he belongs to the brachycephalic breed (flat face), he is not a dog intended for too physical activities such as competitions.

A rather affectionate or wild dog?

Very affectionate, even “clingy” in a good sense. 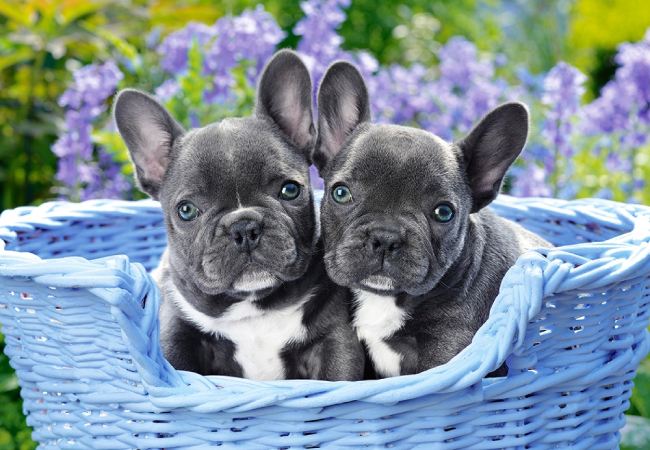 It can act as a watchdog because, although it does not bark much, it warns off unusual noises or simply when someone knocks on the door.

Can it live in an apartment, is it possible? And if so, under what conditions?

Yes, it is possible because what counts are not the fact that he lives in an apartment or a house (he knows perfectly how to stay alone) but the time that we devote to him to walk him, educate him and involve him in family life.

Can he stand loneliness?

Yes, on condition that you teach him and gradually get used to it and also on condition of not being away for long hours because the dog would end up getting bored and, in addition, the problem of cleanliness would then arise.

It is a funny dog, intelligent, playful, alert, quite sporty, very attached to the human, with a short coat requiring only limited maintenance. It adapts just as well to city life as it does to country life.

The enthusiasts do not find him any. This is what explains the craze for this breed for ten years.

The standard defines it as a small format molossoid . It is powerful in its small size (weight between 8 and 14 kilos), short, gathered in all its proportions, short-haired, short-faced, and snobbish, with erect ears, having a naturally short tail. He must have the appearance of an active animal, intelligent, very muscular, of a compact structure and a solid frame.

Each race has its weaknesses. Like all molossoids, the French bulldog, due to its flat face, can develop respiratory problems in some environments due to its soft palate that is too short. In addition, because of a slightly rounded back, the Bulldog can develop certain vertebral problems, but the breed club is conducting a study on this problem and encourages through rigorous selection, to pay particular attention to these two typical breed problems.

A special diet? A tendency to overweight?

No, just a healthy diet and preferably good quality kibble.

Overall, the Bulldog does not tend to be overweight.

Education must always be done firmly but gently. The use of the reward after a successful exercise allows rapid acquisition of obedience and cleanliness.

No matter who you are or what part of the country you live in, you will surely find this breed attractive to have. With a combination of quality traits and the fact that it is easy to maintain- no wonder why it has been endeared into the heart of many.

How to find the best French Bulldog?

There are many ways to find a good quality French bulldog, but the best way is to look for a reputable breeder that has French bulldogs for sale and provides AKC, and VET check like BlueEyesBulldogs does.

How to Design a T-Shirt: Expert Guide