Home » Hunting » Shot Placement on a Deer with a Bow
HuntingOutdoorSporting

Shot Placement on a Deer with a Bow

A good hunter always respects its prey because it’s a living being that is being killed. Perhaps, in solidarity with the idea of respect is to kill the animal humanely. What is killing humanely? It is an idea of taking down the animal with a single shot of the bow. It is imperative and the most important aspect to know where exactly to shoot and practice the art until you are perfect at it.

Also, keep in mind that wild and careless via shooting can wound the animals and let them escape thereby giving anti-hunting groups ammunition to target legal and responsible hunters. But the worst is that it leaves the animals seriously wounded for no cause and harm. In order to help you to have a perfect first shot at the deer, we have listed down and broken them into segments.

Deer is one of the favorite quarries of many populations and killing it down can be really tough as to its recent size and the bow that requires utmost accuracy and precision. Perhaps one had shot could not only leave the animal wounded but also allowing it to run in the dark and have a lingering death.

At first, it’s important to wear the of a responsible hunter and they will help you to narrow down the location to just a few target areas. There are many conflicting opinions that have come from experts regarding which is a better shot in first place. Some argue that a perfect headshot is a guarantee of a perfect kill.

Others argue targeting the heart rather than the brain. Also, you need to understand that many of these expert opinions come from highly experienced and professional hunters. They may be harvesting hundreds of deer annually, more often with highly specialized equipment and sophisticated training. And what might work for them may or may not be applicable to you.

The largest vital organ of the deer are lungs that automatically tender to be a hotspot for hunters around. The heart that is placed below the rearward of the shoulder in the chest cavity and the liver behind that passes the diaphragm. So by cleaving the deer’s vitals with a razor sharp broadhead can deliver you a quick and a humane kill. It basically kills by causing ultra-massive hemorrhage in critical shots. If the hit is too far forward, it will penetrate the thick muscle and may also rupture the heavy bone, while a shot too far can also make recovery late and cause slower deaths.

With the advanced technology in hindsight, one can also practice on a 3D deer target. Hence, contrary to a bull’s eye target where aim can be easily detected, aiming point is varied on a whitetail point. In real life scenarios, the deer’s position relative to hunter alters and therefore the aim for the lethal shot too.

When you are aiming for a broadside sight at a deer at ground level, divide its body into 3 equal horizontal segments visually. Here, the top section of the bottom third is considered as vertical hold on the reference. Just aim at that ideal height and 3 inches behind the crease where deer’s shoulder and midsection meet. So if you have the arrow striking right at this point, it will usually rip through the deer roughly from the same spot it entered. But the aiming point and exit wounds location are relative to the distance and angles creates by both deer’s position and blue hunter’s angle of elevation. 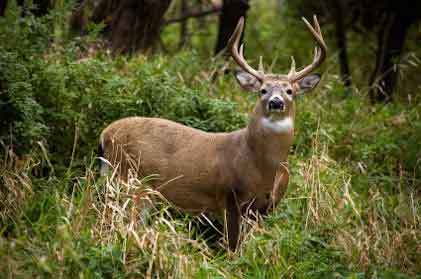 Hence in order to choose an aiming point, the key is to visualize the path of the arrow to exit point on deer’s far side. Then aim to shoot where the deer near side is proximal to the exit point. With this heavy shot, you are aiming closer to the deer’s middle, near the liver instead of aiming behind the front shoulder.

There are many other factors that play an equally important role in bow hunter’s both aiming and shooting decisions. Possibly, the primary one is to be wary of the leaves, trees, branches and tall grass and any other vegetation around the distance between you and the deer. Be patient enough to wait for a more clear shot when narrowing down the obstacles in the projected flight path of your arrow. It is important to know that even small obstacles can divert the path of the arrow and can cause bad hits or utter mishaps.

Another aspect to keep in mind is that when there is more than one deer at the location, then make sure to sort the intended animal which is the recipient of the arrow. Be wary of the fact that whether it’s hitting another deer after passing by the kill or not. But it is better advised to wait for the deer to be cleared off all animals around.

The shooting means always require you to be patient and be able to focus over long periods of time. For instance, with broadside and quartering away deer, first wait for the front leg facing you to take a step ahead, that pulls its shoulder blade ahead and therefore exposes its vitals, giving you a large target area. But always make sure to have thorough knowledge and practice on the field.

This is the article about the shot placement on a deer with a bow to help more people on their hunting time.

Learn How To Get The Recruitment Agency To Notice You