Home » Animal » What Does Catnip Do to Cats?
AnimalPets

What Does Catnip Do to Cats?

If you’re into cats, you’ve probably come across the term “catnip.” So what does catnip mean, and what does it do to your cat? Continuer read this article about the What Does Catnip Do to Cats?

Catnip actually refers to a perennial herb that belongs to the mint family of plants. The term “catnip” is said to have originated from the cat’s response towards this plant. Also known as cat mint and field bam, cats, along with lions, tigers, and Panthers just can’t seem to get enough of the smell of this herb. It’s the kind of plant that cats enjoy the most.

But why do they love the plants so much and is it safe for them? What happens if your cat doesn’t like it? Read on to find out!

Effects of Catnips on Cats

It is the genetics of the cat that determines whether they will fall for this plant, which is said to be a cousin of oregano and basil. According to studies, one in two cats inherits sensitivity to this herb. But there’s really no way of determining if your kitten will like this herb until they reach the age of 3-6 months.

The allure of catnip has something to do with its volatile oil, most especially the nepetalactone, a chemical that’s found on this oil. This chemical is present on the plant’s stems, seeds, and leaves. It will only take a sniff or two of this oil before the cat will start chewing and licking it with much bliss!

Although the feeling of bliss that cats enjoy is short-lived and lasts around 10 minutes for most cats, the euphoria could make some cats to behave with aggressive playfulness. But the oil has contradicting effects on some cats. It could make them stay calm and mellow.

Regardless of the reaction that your cat has, when the pleasure passes, it will be around two hours before the kitty responds to the catnip again. 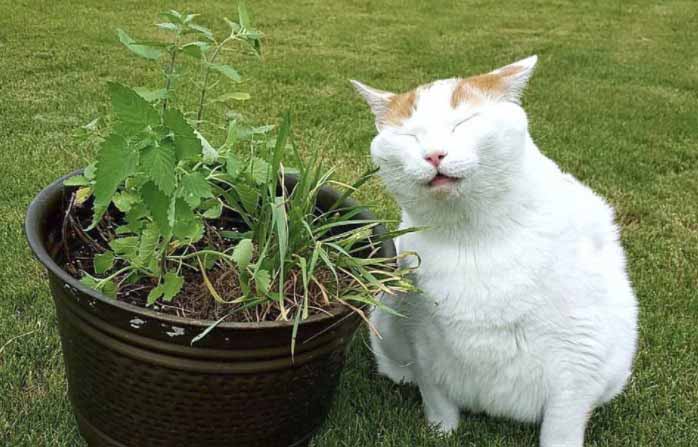 What Does Catnip Really Do to Cats? Image via Kittentoob.com

Since cats respond to catnip over and over again, the herb is sometimes used as a training aid. For instance, if you want to keep your kitty from biting the furniture, get a scratching post and rub catnip to it, so the cats will end up chewing on the post instead of the furniture. Also, if you’ve bought a new cat bed for your furry friends to sleep on, uses the catnip to make the bed more appealing to them.

It’s also possible to use the catnip as a toy. Simply sprinkle a bit of the catnip into some old socks and tie it on the top. This can serve as a toy that your cat will surely love to play with!

The intensity of the cat’s response to training and toys using the catnip will also depend upon the type or variety of catnip plants that you’re going to use. Although most cats enjoy nibbling the herb fresh or dried, they are usually not to keep on catnip sprays, which don’t usually have enough of the nepetalactone, which is what’s appealing to most of the felines.

Fortunately, for most kittens, catnip is non-addictive and is totally safe for them to eat. It’s also easy to grow, especially in a sunny area. You may also create your own garden of catnip or include other plants in it, such as barley grass, rye, oat, and wheat.  Not only will the kitty enjoy the presence of catnips, but they will also love the fact that they have their own garden to play with and this prevents them from attacking the other plants in your house.

The potency of catnip doesn’t really last forever as the essential oils dissipate quickly. So if you’re buying dried catnips for your furry friends, store the rest that you don’t use in a freezer.

Catnips Do Not Have an Effect on All Dogs

Some groups of scientists have actually discovered that not all cats react to catnip. If your cat is sensitive to nepetalactone, it means they will not get that feeling of  “high” that some other cats normally get when ingesting catnips. This sensitivity is usually more common than many think. According to research, 50 to 75 percent of cats react to catnip once they are exposed to it, while the other 25% won’t have any reaction to this plant at all.

Humans Can Also Benefit from Catnip

While many think that only cats can benefit from catnip, humans may actually benefit from it as well. Although the plant will not have the same psychedelic effects on humans as it does on cats, it has the ability to calm people down and ease their pain.

Not many people are aware of this, but catnip is actually one of those herbs that have plenty of healing qualities for humans. Teas made from catnips can help treat headaches and nausea. If you are hesitant about taking pills, the catnip tea would be a better option.

Catnip is definitely not toxic to cats and humans, so there’s nothing to worry about when using this herb for therapeutic purposes. In fact, some people find catnip tea to have a somewhat similar effect to chamomile. Furthermore, catnip is also good at repelling mosquitoes.

You Can Actually Train Your Cats by Using Catnip

Catnips are available in different consistencies and forms. One of the biggest benefits of this plant is that you can use it for training your cat. If your furry friend is known to have tantrums too often, then you’ll find the catnip beneficial.

For instance, your cat loves to scratch on furniture constantly, and you’re scared that it will do the same thing on the new couch that you’ve bought, then here’s when you can use the catnip with a scratch post. You’ll find the scratch post being sold at a local pet store near you. Set up the scratching post close to your new couch.

Sprinkle the catnip all over the post in order to entice your cat to scratch it instead of your new couch. The nepetalactone can do wonders on your cat and will hook them enough to discourage them from scratching other furniture, especially your precious new couch.

What does catnip do to cats? Find this article helpful? Leave your comment here!

How to take care of mealworms, mealworm pupa care.